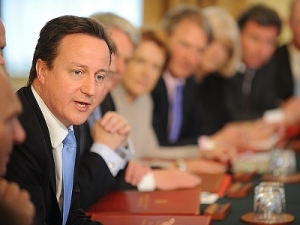 David Cameron has governed, more successfully than most expected, amid economic crisis and a Coalition (see here for an assessment). Using the Leadership Capital Index, how can we assess his leadership?

1. Cameron’s vision is unclear. Aside from a commitment to austerity and a small state, there is no ‘Cameronism’. His ‘Big Society’ idea has amounted to very little. Vernon Bogdanor (his tutor at Oxford) argues: ‘He’s an instinctive Tory, not ideological. He’s more in the mould of Baldwin, Macmillan.’ Anthony King is less kind: ‘He appears to be a man without a mission – enjoying being in power but not bothered about using it’. Cameron’s one visionary area, modernisation of the Conservative party, appears to have failed.

2. His communication skills are strong, displaying prowess in set pieces and less formal settings. He has proved adept at setting out a brand of optimism and using his skills to extract himself from crises (though many are self-imposed). He appears relaxed and authoritative in power (see Tim Bale’s assessment here).

3. Cameron’s popularity is low but he has consistently polled higher than that his opponent Ed Miliband (and much higher than his Liberal-Democratic Deputy Prime Minister). Public perceptions of Cameron remain ambiguous – he broadly seems to be seen as capable but out of touch.

4. His party remained behind Labour for much of the time in office, though recently a couple of polls have even put them ahead. The Liberal-Democrats, by contrast, have flat lined. The uncertainty over polling is now centred upon the rise of UKIP and what the ‘revolt on the Right’ may cost the Conservatives-a dead heat may be a possibility in 2015.

5. It is unclear if time in office has developed Cameron’s skills. Some see him as a delegator, creating a team of strong and long serving Ministers to deliver policy (Osborne in the Treasury, Gove in Education). Yet others claim he lacks a ‘political antenna’: despite four years in the job he appears unable to foresee crises-from Syria to his appointment of Andy Coulson as communications director. His skills as Coalition leader has helped make the Coalition an unexpected success or a least making sure it hangs together for the duration.

7. Cameron is safe from any intra-party challenge. Unlike most Prime Ministers, Cameron’s senior relations are good (possibly because he ‘delegates’) and, though powerful allies are jostling for succession, none are seeking to remove him. His one major rival, ‘king over the water’ London Mayor Boris Johnson, is outside Parliament and now faces a major choice to enter the Commons or wait (see here and here).

8. Cameron’s original election as party leader has left a residual group of traditional backbenchers who did not vote for him (over 50% of MPs in 2005 did not support him). Arguably, they have never reconciled themselves to his leadership (see below).

9. Cameron’s delegation makes it difficult to gauge his control of policy. Many policies appear to be credited to others: economic (Chancellor Osborne) or education (Education Minister Michael Gove). The policies closely associated with Cameron have proved controversial: his audacious attempt to ‘cure’ the Europe issue by promising a referendum on membership has failed. His support for military intervention in Syria was stopped in its tracks by Parliament. His ‘ideological’ commitment to same-sex marriage was successfully pushed against the wishes of his own party-possibly at severe cost. Other policies have been marked by ‘pauses’ (NHS reform), U-turns or even double-u-turns (see plain cigarette packaging). His crisis management is effective in communicative terms but not strategically: he appeared slow to react to the floods across Southern England in 2013 and, as of this moment, his assault on Scottish independence appears to be back firing as polls move towards a ‘yes’.

10. Cameron’s Parliament has been turbulent. However, he has not faced the nightmare scenario of simultaneous revolt from both Coalition partners. Indeed, sound and fury from Cameron’s Coalition partners has not amounted to defeats. Despite the Lib-Dem leader’s claims, the junior partner, as often happens, appears the loser in the partnership. It is in Cameron’s own party where relations are very poor. Cameron, argues King, spends ‘remarkably little time minding the shop’. In policy terms, Benedict Brogan spoke of how Cameron too often relies on the ‘Hail Mary Pass’. This is not wholly Cameron’s fault-he inherited an increasingly rebellious Parliament. However, Cameron’s backbenchers feel resentment over the Coalition, Cameron’s failure to win in 2010 and his constant reliance on ‘pushing through’ policy against the wishes of his own party (leading his increasingly Eurosceptic and right leaning party to suspect Cameron is not a ‘true’ Conservative at all). Cameron’s recent high risk ‘no coalition’ commitment is an attempt to win back support.

Cameron has utilised his skills and relations, managing well in an unusual environment (Coalition) and in an unusual situation (delegation and lack of rivalry). Yet his twin weaknesses are dangerous: his lack of judgement feeds into his policy and his poor relationship with his party. His reputation for achievement is minimal as others take the credit in a vision free vacuum. Cameron is therefore a dependent actor, very reliant on others to gift him leadership capital ahead of the general election. Does he have enough capital left to win?

One thought on “Prime Minister Blues? An Assesment of David Cameron 2010-2014”

Site of the specialist group for the PSA

The Art and Craft of Blogging

The latest news on WordPress.com and the WordPress community.